Worshipping the Tiger Matters for Conservation 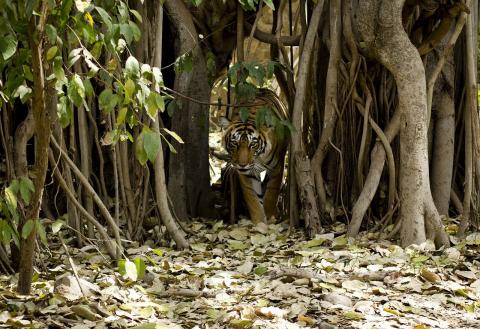 The non-use existence value of nature is a seldom discussed topic in the field of economics, and for good reason: In a subject full of figures, equations, and meticulously constructed quantitative models, how could one estimate the numeric value of something so abstract and unused by people? In his recent paper "Worshipping the Tiger: Modeling Non-use Existence Values of Wildlife Spiritual Services," CEOS researcher and UIUC professor Dr. Shadi Atallah does exactly this. His newest research quantifies the spiritual value of the tiger to the Soligas Tribe in India and shows how that value can be harnessed as an economic tool for promoting sustainable wildlife conservation and preserving the ways of life of indigenous people.

Dr. Atallah and his co-author, Dr. Adrian Lopes of American University of Sharjah, were first drawn to the story when they read an article about tigers on the Biligiri Rangaswamy Temple (BRT) Tiger Reserve in India. Tiger populations there have increased, and the article argued that indigenous tribes that coexist with and have spiritual value for the tiger can work to promote its conservation. However, this coexistence is not valued by decision makers; the Soligas tribe land rights had actually been temporarily taken from them in the name of tiger habitat conservation before they were reacquired in accordance with the Indian Forest Rights Act.

Most previous research on tiger conservation has focused on reducing poaching which often entails separating humans from wildlife. Atallah and Lopes wrote "Worshipping the Tiger" to answer two big questions: What spiritual value do members of the Soligas tribe place on tigers, and can coexistence with such a tribe cause tiger populations to increase?

Atallah and Lopes set out to model tiger population dynamics under several different management scenarios. The team found that securing property rights of the Soligas tribe actually would increase tiger populations. The model also found that poaching fines were only marginally effective when the tribe had property rights and delayed extinction but did not prevent it when the tribe didn’t have rights. The evidence makes a strong case for allowing the indigenous tribe to retain control over the land and provides a more economically efficient alternative to poaching fines, which have enforcement costs and are imperfect.

While researchers and some conservation practitioners have long known that local tribes can be strong conservationists, Dr. Atallah hopes "Worshipping the Tiger" will provide quantitative evidence to complement human rights and ethical arguments for honoring and securing the land rights of indigenous peoples. Going forward, Dr. Atallah plans to test the validitiy of the economic model in other locations, particularly where the context allows using survey methods to test the empirical validity of the estimates in this research using different methods. Doing so would allow his team to collect more empirical evidence and ultimately find new ways to model and value cultural ecosystem services and preserve indigenous ways of life.

Dr. Atallah points out that the economic, environmental, and social components of sustainability are often thought to be at odds with each other. His research into the relationship between the Soligas tribe and tiger populations shows a path forward in tiger conservation that promotes all three objectives. When indigenous tribes are given appropriate property rights, their spiritual values are safeguarded, the environment can be preserved, and goals can be accomplished in an economically efficient way. This research provides hope that tensions between the three components of sustainability can be minimized if all factors of conservation strategies are taken into account and properly valued.

Listen to the most recent CEOS podcast for an interview with Atallah where he shares his thoughts on "Worshipping the Tiger" and expands on the topics discussed in this article. “Worshipping the Tiger: Modeling Non-use Existence Values of Wildlife Spiritual Services,” is published in the journal of Environmental & Resource Economics.